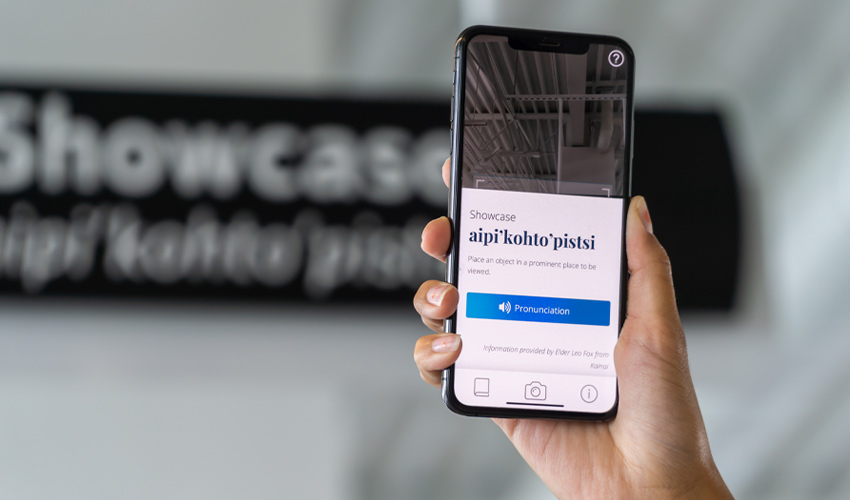 A new app developed by a third-year information design student uses augmented reality (AR) to translate Blackfoot signage in the Riddell Library and Learning Centre (RLLC) into English. Blackfoot way-finding signage was installed when the RLLC was built in 2017, and the app helps non-Blackfoot speakers understand the meaning behind the words.

Librarian Jessie Loyer says the signage and app are about ‘place-making.’

“Indigenous languages generally haven’t been supported and they are really important for us to ground ourselves in the place that we are working and living in. This is the language of the land that enables us to do our work.”

The app – called DeciphAR – includes an audio pronunciation guide, a video with elder Leo Fox from Red Crow College in Lethbridge, as well as descriptions of the terms. Library media designer Matt Laidlow, part of the team that helped with the project, says, “For a lot of the translations there’s not a one-to-one English to Blackfoot word, so it’s more about the concept, kind of relating to the English word.”

Augmented reality makes it possible to provide more information than a physical sign could, Laidlow adds.

“Blackfoot signage right now runs the risk of becoming museumified, as if they are a fun little art piece,” Loyer says. “But we want it to be used. We want people to not be afraid of the pronunciation, to feel that they can use these words and know how to pronounce them so it’s less of an obstacle and more of an opportunity.”

Info design student Chase Schrader, junior AR designer and the app’s developer, says the tool is an opportunity to raise awareness and educate anyone with even a bit of curiosity. “(Before), I think a lot of people would look at those words and not think twice about it. Or they’d question it and then not pursue it. Now they have a path to pursue their curiosity and maybe learn.”

For Loyer, it goes back to place-making and sending a message about what the institution values.

“Libraries think a lot about how a space can be welcoming ― the way that the desks look, the way that our collections are organized, the terms that we use,” she says. “And so having Blackfoot language here is a signal, largely to Blackfoot students and Blackfoot people who walk into our space that this space is for them. But it also signals to other Indigenous people that this is a place where Indigenous knowledge is important.”

Part of developing the app included testing it widely with the campus community. Library associate dean and team member Francine May says they received good feedback from users and made some improvements to the app’s usability as a result.

“We had a huge turnout for testing and people from all areas. We had students, staff, faculty to help us. They were so interested in what this is and helping to make it successful. It was very generous of them because it takes a while to go through the whole building.”

Emerging Technologies Specialist Anna Nuhn says thanks to that feedback the app is clean and simple to use. “We wanted to go in that direction to make it more accessible to anyone, regardless of their background interacting with technology prior to using this app.”

The first time a user opens the app there’s a tutorial on how to use it. Signage throughout the building includes QR codes that people can scan with their phones, which will take them to the iOS or Android app stores to download the app.

“We wanted no learning curve at all,” Schrader adds. “We wanted users to be able to go through the tutorial and jump right in and start listening to the pronunciations.

“Essentially all you do when you see a Blackfoot sign is point your phone at it,” he says. “It will start scanning and what we dubbed an ‘info card’ will pop up. The cards provide the explanation, the English, the Blackfoot, and the button to listen to the pronunciation.”

Nuhn says that because of the simple design, there’s room to scale later on. “This is really just iteration one of this app. In the future we would like to add additional Kainai Blackfoot speakers onto the app, and we’d like to add additional languages so that it’s not just the language that you see on the directional signage, but potentially other Indigenous languages that are not represented in the building.”

Nuhn says they plan to share the technology and platform with Red Crow College, as it plans to integrate a similar offering into its library.

“A library holds a particular kind of collection that is obviously influenced from a particular perspective, through no fault of our own just through human biases and through history,” she says. “Librarians think about the ways that we collect, and we think about where we’re collecting from and the languages that we’re collecting in. But there’s always space to think about who’s not here. And so it helps to remind us to do work that is more reflective of the community that we serve.”

“As a campus, when we design and plan spaces and programs, there’s an opportunity to be intentional about acknowledging the diversity of communities impacted by the University’s approaches,” says Meagan Bowler, dean of the University Library.

“This initiative was possible because of the creativity and commitment of people and teams in the Library, across campus, and into the community, to the work of indigenization. I’m very proud to work at a place where people are able and inspired to come together to further this work,” she says.

More information about the app is available on the Library website and in this video. Download the app for iOS orAndroid.